Product Description
The Southernmost Point Buoy is an anchored concrete buoy in Key West, Florida, marking the southernmost point in the continental United States, the lowest latitude land of contiguous North American States. It is 18 feet above sea level. The large painted buoy was established as a tourist attraction in 1983 by the city at the corner of South Street and Whitehead Street. Today it is one of the most visited and photographed attractions in the United States. The southernmost point was originally marked with a small sign, before the City of Key West erected the now famous concrete buoy in 1983. The concrete buoy has overall withstood several hurricanes and is a gathering place for photographs and tourists.The paint job was damaged by Hurricane Irma in September 2017, but it was refurbished later that year by the original artist supported by the City of Key West which values the landmark as a tourist attraction. Cuba is roughly 90 miles south of this point in Key West, although this was not originally on the marker, but rather on a smaller sign next to marker. Westman Works celebrates this Florida Keys landmark with this beautiful mobile. Perfect for any patio or beach bar. 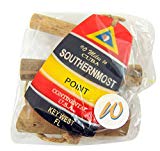