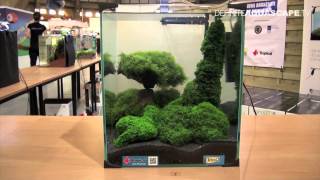 Aquariums arranged during the live aquascaping contest, organized at ZooBotanica 2012 fair held on 14-16 September 2012 in Wrocław, Poland. Altogether 16 aquascapers took part in the contest, and 16 nanoaquariums were arranged. There were both planted aquariums and biotope aquariums, some of them really good. The first place was a planted aquarium with rare aquarium plant Bucephalandra, which belongs to the Araceae family. The second place was a composition based on fragments of driftwood, overgrown with phoenix moss and mini pellia. The third place was a layout arranged rather as a “landscape” than an aquascape – two hills, separated by a clear path made of fine sand, and a lonely tree, made of fragment of driftwood. Aquatic plants used in this composition were mostly Eleocharis and Utricularia. As for other aquariums, there was a very nice biotope aquarium, imitating a stream somewhere in South Eastern Asia. The substrate was fine bright sand, there were numerous colorful pebbles on the bottom, lots of driftwood and very nice Microsorum plants. This aquarium was stocked with Stiphodon gobies. Another very original composition was actually not an aquascape, but rather a protest against all forms of kitsch in the fishkeeping hobby. There was a fishbowl put inside the nanoaquarium, with plastic plant and empty sardines can, with the inscription “Fishbowl, Rest in Peace”. Such exhibit should be located in every pet shop, to remind the customers and the sellers what should be avoided in the fishkeeping hobby 🙂